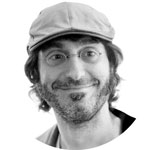 Designer and illustrator Cesare Asaro has one foot in Europe and one foot in the US. He has worked on both continents in the animation industry on projects like Three Delivery for the Animation Collective, Sesame Street’s stop-motion Bert and Ernie’s Great Adventures and Disney’s Princess and the Frog.

He has also worked as a design consultant for large organizations such as the International Atomic Energy Agency at the United Nations and Benetton Megastores, as well as managed a freelance business as a storyboard artist with projects for varied clients in the advertising industry.

Since 2010 he has helped create the fictional worlds of Curio & Co. to bring an alternate history to life. His work there includes the Eisner-nominated Finding Frank and His Friend and the Gadabout Time Machine User’s Manual, recently optioned to Hollywood for a feature film. Cesare relies on his background in Fine Art to create believable facsimiles of period-specific drawings and illustrations – from pencil to digital originals – to recreate the past and provide a nostalgic trip down memory lane.